Posted on 24/11/2016 by gravemaker
in: Categories: News, Nieuws and Thesis. Tags: Holocaust, media, Newspapers and thesis.

In April 2016 I began writing my master thesis. But actually, the preliminary thesis process already started in November of 2015. During the second teaching period, students followed a tutorial course in which we perfected our writing and research skills and drafted a research proposal for the thesis. Students could choose between several tutorials with different research perspectives. I found this hard at the beginning, because my main research interest was memory studies and there was no tutorial on this. So, in the end I went with a tutorial that focused on public debates and discourse. 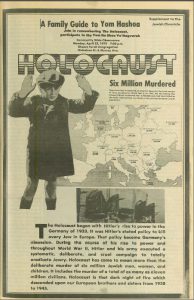 After some initial hiccups, I decided to research the Holocaust discourse in the postwar twentieth-century Jewish-American newspapers, because I have always been interested in the Second World War and in American society. I used the theory of representation by Stuart Hall to analyze how this Holocaust discourse changed between 1945 and 2000, and what this tells us about the Jewish-American community. I found that the Holocaust was inherently connected to Judaism in a time when Jewish-Americans more and more became accepted as ‘Americans’ and assimilated. The Holocaust served both as a remembrance trope for Jewish identity and heritage, and also as a warning: the Holocaust shows what (Gentile) people are capable of doing. I also compared the discourse of Jewish-Americans with that of the Gentile American public sphere and found that Jewish-Americans used the term ‘Holocaust’ directly after the Second World War, instead of the Jewish word ‘Shoah’. In the postwar years, the Holocaust discourse was practically absent in Gentile American public debate. This changed during the late 1970s, when interest in the victims’ side of the war dramatically increased. This led to an increase in the use of the Jewish term ‘Shoah’ in the newspapers that I analyzed. The relatively new research method of analyzing newspapers in digital databases allowed me to draw conclusions about the abovementioned discourse over a larger period of time than had usually been done by historians.

For me, the most difficult of the thesis writing process were the early stages. I usually have trouble with finding a specific focus for my research, finding useful sources at first, and actually beginning to write. The tutorial course really helped with these difficulties, because in the fourth teaching period one does not have to start from scratch. Besides this, I received a lot of useful feedback from both the supervisor and the other students of the tutorial/thesis group. Having regular meetings with this small group and the supervisor, in which we discussed our progress, allowed us to dive into each other’s research and provide in-depth feedback our work. Overall, I think that writing the thesis is the most difficult part of a master’s degree, but it is certainly doable with some support and good feedback.

RT @AHAhistorians: Why study history? What can you do with a history degree? Find out the answers to these questions and more with the AHA'…