Posted on 24/10/2016 by Jaap Verheul
in: Categories: News and Thesis. Tags: colonialism, empire and material history. 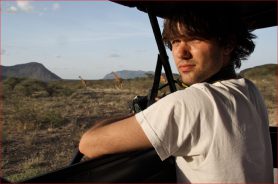 My thesis discussed imperial hunting in British East Africa in the period 1870-1914. By analysing hunting travelogues that were published in this period, I investigated the desire for possession that underlay colonial hunting practices. By using Jean Baudrillard’s theory of objects and the logic of collecting, I showed how hunting trophies (such as  stuffed animals, tusks, claws, and tails) and photographs embodied and performed various scientific, aesthetic, and racial discourses associated with the colonial project. I argued that viewing hunting trophies (both those produced from animal bodies and photographs of live animals) as objects to be possessed and collected reveals the underlying anxieties and fears about the effects of civilisation that shaped colonial discourses. An examination of ‘camera hunting’ through this theory of collecting offers us a new perspective on the shift from imperial sport hunting to wildlife photography, conservationism and the formation of game reserves around the turn of the century: it reveals the underlying systemic logic that created the need for a pristine wilderness.

It is fair to say I did not come by this topic or methodology directly. The material culture/history approach was informed by the tutorial ‘Objects of Empire’ that I took. Here we discussed the ‘social lives’, trajectories, cultural meanings and forms of exchange of various objects. This was a totally new and challenging but exciting field for me. In fact, I had taken the tutorial partly because I was relatively familiar with postcolonial theory from my previous literature studies and hoped there would be some points of contact. Another influencing factor on my choice of topic was the fact that I lived in Kenya for many years – I had gone on countless safaris and was curious to discover what confluence of factors had produced this practice.

Happily it turned out that I could use Baudrillard’s theory of collecting, one of the theories discussed in the tutorial, to bridge my background in literary studies with historical research. Though my research fell, broadly speaking, within the boundaries of material history I relied primarily on contemporary hunting travelogues and works on taxidermy in order to get at the meanings sport hunting and hunting trophies had in colonial culture. This is not to say that these two poles were finally reconciled: I struggled to rein in my instinct to put theory first and confront a large amount of primary sources without knowing what I would find, or even precisely what I was looking for. Similarly, I found it difficult to write while still working through primary sources.

As for the relevance of my research, the methodology of material history is part of a larger (and interdisciplinary) turn within the discipline of history and the humanities in general, towards the consideration of objects, physical processes, resources, and animals. Much of the existing literature on sport hunting in the colonial era focussed on either its economic role or the gender and racial boundaries it either reinforced or fractured. By paying attention to objects and their role in determining socio-cultural formations I was able to shed a new light on the motivations, desires, and anxieties of big game hunters and of colonial culture more generally.

RT @AHAhistorians: Why study history? What can you do with a history degree? Find out the answers to these questions and more with the AHA'…